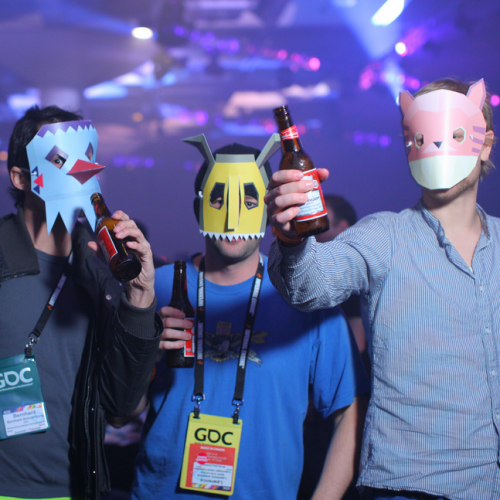 The Next Level Blog welcomes international guests again. After interviews with Pippin Barr, Jakub Dvorsky and Jonatan Söderström aka Cactus today we present you the fourth interview in a series by art critic Mathias Jansson who contributes to the blog by interviewing the finest Indie Game developers from all over the world.

»Die Gute Fabrik is a small games studio based in Copenhagen, Denmark. We take classic play forms from the past - be they physical folk games from the playground or adventure games from old consoles - and breathe new life into them with 21st century technology and our own sense of style and storytelling. We strive to develop games that are hand-crafted, synaesthetic, offbeat, and above all, personal.« (from Die Gute Fabrik homepage)

Mathias: What is the history behind Die Gute Fabrik?

Nils: I founded Die Gute Fabrik in 2008 while I was hiking around the Fjords of Copenhagen. It was just an abandoned factory back then, but I liked the view and moved in. It's a really nice base to work on projects, since it's quiet and the nature around this place is quite spectacular. Bernie Schulenburg stayed here for a while and we worked on Where is my Heart? together. Recently I was joined by Douglas Wilson, the Designer of Johann Sebastian Joust, who became my partner in running the firm. We're both cofounders of the Copenhagen Game Collective and have been working together on several projects among others B.U.T.T.O.N. and 5 minute mmorpg. Since we value each other's work a lot, it made sense to join up and run this studio together.

Mathias: Why are you so interesting in recycling old game concepts?

Nils: The games we're interested in are rooted in the past, be it folk games or video game concepts from our youth, but we both have the feeling that you could take those concepts and create something unique with the knowledge and technology we have today. I'm not talking about just recycling old game concepts, but move them into entirely new directions. It seems that in the evolution of games a lot of possibilities have been neglected, and we'd like to have a second look at those missed opportunities.

Mathias: The game Johann Sebastian Joust was a part of the art exhibition Space Invaders at Nikolaj Contemporary Art Center in the beginning of 2012. Can you tell me about the game and why do you think it was selected to be exhibited in an art hall?

Nils: Johann Sebastian Joust is a no-graphics, digitally-enabled folk game for 2 to 7 players, designed for motion controllers (such as the PlayStation Move). Each player has a controller in their hands, once they move the controllers too fast, they're out. The sensitivity of the controller is tied to the speed of the music, so when the music is running in slow motion, the player has to move extra slow to survive. When the music speeds up, this threshold becomes less strict, giving the players a small window to dash at their opponents. Channel the power of J.S. Bach, and try to jostle your opponents' controllers while protecting your own. The last person standing is the winner.

The game was selected for the exhibition, since it goes beyond the traditional videogaming demography. People who have no experience in video games can pick up J.S. Joust and have fun with it. Instead of the players and spectators looking at the screen, they look at each other and automatically get into contact. It's basically a very immediate social experience where there's no filter, like a screen or some interface between the participants, which is quite rare for digital games these days.

Mathias: What qualities do you think a video game should have to be an interesting work of art?

Nils: If it breaks with the conventions of the medium in some way and expands the understanding of the observer of what games can be or if it's just really, really beautiful.

Mathias: In both Where is my heart? and Rückblende the story in the games is based on a childhood memory. The childhood is a common theme in literature and film, but how can personal experiences and memories from a person’s childhood be used in video games?

Nils: Video games are among other things a good storytelling medium, but it works quite differently from a book or a movie. As long as you can involve the player and make the player feel as a part of the story, you can pretty much make a game about any topic. I think it's important that the players don't feel too much that the story is forced on them, but that they can discover it by themselves.

Mathias: How do you experience the indie game scene in Copenhagen?

Nils: The game jams at the Copenhagen IT University each year are great, and with the Copenhagen Game Collective we tried to arrange some events and bring our games to the public, which worked ok so far, but we still have a long way to go. Besides the collective, I'm seldom participating in social game industry events in Copenhagen. There are some really talented indie developers in Copenhagen, but I don't know them well personally, so I'm actually not sure whether we have a scene here. I hope that this will develop over time, though.

Mathias: And how do you see on the future for indie game developers as yourself?

Nils: Hard to predict the future. It's easy enough to release a game these days, but it's hard to make a living of it, especially if you want to stay independent.

Interview series with the finest Indie Game Designers by Mathias Jansson on the Next Level Blog:

Part 1: Interview with Pippin Barr – »The Artist Is Present«

Part 2: Interview with Jakub Dvorsky – Creator of Samorost and Machinarium