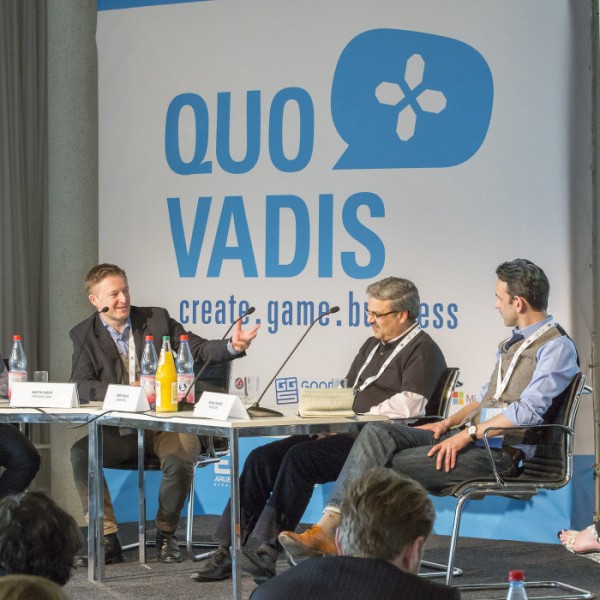 Quo Vadis is one of the top three European games industry conventions. As Europe’s longest-standing professional game developers’ conference, Quo Vadis focuses in depth on all aspects of video game development and marketing, and addresses developers, publishers, decision-makers, researchers and young talents in the industry.

Quo Vadis - Where are we headed?

Representatives of the games industry have been addressing this question every year at same developer conference since 2003. During that period, the Quo Vadis has become Germany's largest conference for topics related to the video game industry. First chosen in 2007, the Berlin venue embodies everything games are about: youth culture, creativity and a love of play.

Workshops, panel discussions and lectures provide Quo Vadis participants a framework within which they can discuss the most important trends. There are few areas in which these change as rapidly and radically as in the video game industry. The games industry is a melting pot for different creative disciplines which are themselves subject to constant change. From graphic design to sound composition, from storytelling to animation technology - everything has its place in the development of video games.

Thinking outside the monitor

In addition to topics related to the development of video games, the Quo Vadis also takes an in-depth look at the questions of proper marketing, sustainable business models, the necessary research and appropriate fostering of young talent. This means that the entire range of subjects pertinent to the video game industry is covered by a single conference, and at levels for enthusiasts and beginners as well as for industry veterans!

Held annually since 2003, Quo Vadis is Europe’s longest-standing game developers’ conference. The event moved to Berlin in 2007, and was attended by more than 2,500 visitors in 2014. Quo Vadis has firmly established itself as Germany’s biggest conference for all games industry-related themes and is one of the industry’s top three conventions in Europe. Featuring a broad range of panel discussions, presentations and workshops, the developer-focused conference provides an insight into industry trends and is the centerpiece of the concurrently held INTERNATIONAL GAMES WEEK BERLIN. Quo Vadis is organized by Aruba Events GmbH.